Complete („R0“) resection of liver metastases offers the only chance for long term survival/cure. The benefit of chemotherapy before or after resection of resectable metastases to improve overall survival rates is still on debate. 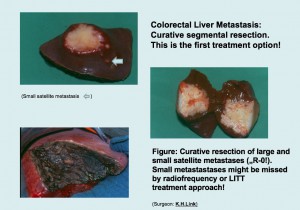 In nonresectable liver metastases chemotherapy may reduce the extent of the disease and allow resection with long term survival rates.

The Ulm group was the first in Germany and among the first worldwide to show, that downstaging  of nonresectale liver metastasis by chemotherapy followed by curatve resection is possible.

Example: Downstaging and resection of primarily nonresectable metastasis („nonresectable“ according to a liver surgeon´s judgement)

The patient had numerous tumor nodules in both sides of the liver (slide 1). The metastatic disease was confined to the liver. The patient had the primary rectal cancer removed. Then he received individualized chemotherapy. He responded very well (slide 2), and all metastases were removed for cure by atypical (nonsegmental) resection (slides 3 & 4): 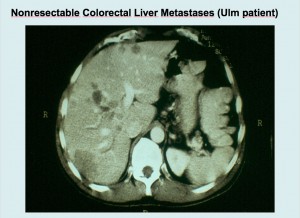 Slide 2: CT-scan of the same patient after individualized chemotherapy. No liver metastases are to be seen, only scars: 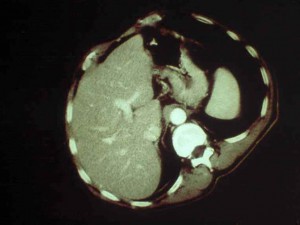 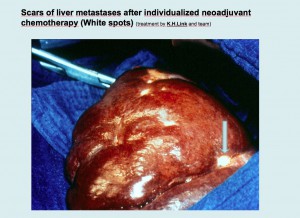 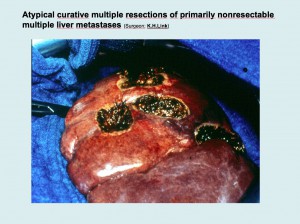 This work was presented at the meeting of the German Society of Surgery as a new procedure – and had, simply spoken, at this time no full support of the established surgical community. The Ulm group was among the first worldwide to publish large series of “downstaging and resection” (slide 5) which is now recommeded as standard in primarily non-resectable colorectal liver metastases. 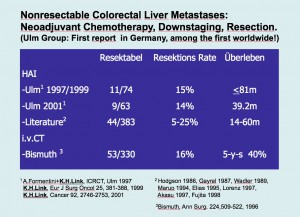 Response, downstaging and resection of primarily nonresectable metastasis („nonresectable“ according to a liver surgeon´s judgement) can be improved by individualizing the treatment protocol with testing the targeted tumor´s individual chemosensitivity. The Ulm group was the first worldwide to show, that improving response and survival is possible by using individual tumor cell culture and molecular biological tests. Publication of results were rewarded as „Best Paper of the year 2000“ in „Cancer“, one of the most prestigious cancer journals (slide 1). Now this topic is „innovative“ internationally (personalized medicine). 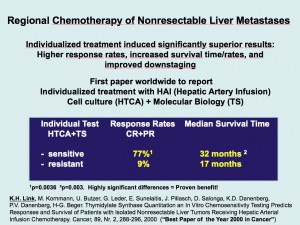 We also were the first worldwide to perform a two step liver resection procedure with interim individualized chemotherapy in a young patient rejected for any liver surgery in an expert center elsewhere. At the time of first presentation survival exspectancy was less than a year; the patient survived more than 7 years after the procedures. (Poster Award 1993; now „innovative“ in liver surgery). 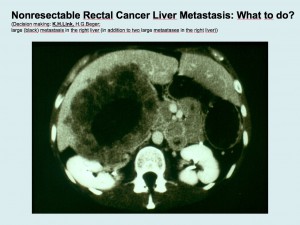 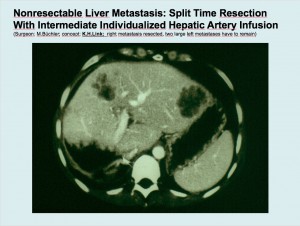 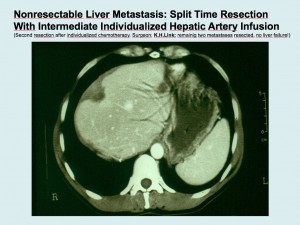