Karl-Heinrich Link:  A carrier of hope for patients with large bowel cancer

A short Biography by F. Eder

Professor Dr. Dr. h.c. Karl H. Link accepts each challenge in his professional field „surgery“, and his speciality, „surgical oncology“.  By this, he offers hope to his patients, especially those with malignant diseases, such as bowel cancer primary tumors and their metastases to the liver or to the peritoneum, and to pancreatic cancer patients.

How do I find the best surgical oncologist for me?  Who has the best qualification to treat my disease, working under the aspect to offer all around knowledge with an interdisciplinary team? Whose therapy will fully reconstitute my every day´s capabilities or, in case of a life threatening disease, who may offer higher survival probabilities than elsewhere? Who offers the humanity I require, who is open for my fears, who can cope with my angers?

A first answer directing to the demands with large bowel cancer may be given by the quality list of the German Cancer Society (GCS) on the analytic data base of 263 Germany- wide certified large bowel cancers (BCC): The BCC at the Asklepios Paulinen Clinic (APC)  under the leadership of Karl-H.Link  is placed among the best institutions of its kind. The objective reasons for e.g. low mortality rates, are the surgical training, the team- and the hospital structures.

Pioneer and doctor with passion 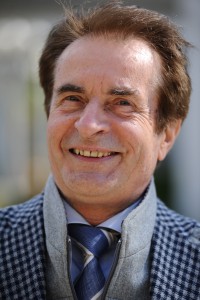 Of course the main contributor is the center head, Professor Link, who is representated regularly in the German „Focus-List“  as outstanding specialist for his achievements. Here more personal details of the surgeon, who is coordinating the close cooperation of Gastroenterologists, Medical- and Radiological Oncologists, Pathologists, and many others,  are given.

The reason for a more detailed description is the  fact, that patients not only decide for their doctor on the base of certificates or statistics. Tumor patients must be confident with the professionality and humanity of the doctor responsible for their treatment. This trust is the prerequisite for your successful treatment, meaning cure or reduction of complaints. With Professor Link you find a doctor and individualist differing positively from average even from the beginning in his childhood.

Born in 1952 in North-Spessart, a part of Germany rich of nature and forests, he grew up in a catholic family as third of five children, learning the importance of direct human communication in personal interaction, and what it means in private and professional life to respect the individual demands of the partner  whome you communicate with. In the family owned factory he had liked to put hands on, when he stood aside the senior carpenters in the factory hall or at building sites; in spite of this „hobby“ he decided, in contrary to his father´s plan to follow him in his head position (Karl has a younger brother), and took up steps towards his favourite aim to become a surgeon.

At school he preferred the natural-mathematic branch of the Gymnasium, was also very active in sports, was leading teams, and became „Minister of Sports“ in the scholars´administration.

His multitalent was primed in primary school by a special event: The lefthanded first year pupil Karl (who already could write) was enforced to write righthanded. Due to this pedagogic standard measure of that time he acquired the ability to work with both hands. Impressive is his ability to write any text bothhanded in parallel to and from – a special talent which, of course is very helpful during his surgical task.

Most probably this very rare ability – that is nowadays known to have a very positive effect on brain development – lead to a special character able to think and act across conveniences, important for his scientific career. With his Ulm University study group, conduction translational research and large scale high class nationwide trials,  they were among the first worldwide to individualize cancer treatment sucessfully. Their work was concentrated on bowel cancer, pancreatic cancer, liver metastases and peritoneal cancer. More about that later.

Although being a cross thinker desiring always innovation he is a conservative person in his private life. Being married with Dr. Reinhild Link, a very active nutritionist in nationwide social projects, the family has three children aged 22-29 years, all of them facing academic careers.

Not only for pleasure, but also with the aim to be fit for his family and his profession as surgeon, sometimes performing 12 hour operations, he is very sportive during the week, playing tennis and basketball, and riding his mountainbike with two friends uphill in the forest area adjacent to his family house.

Besides sports he is keen on healthy nutrition, not only driven by his spouse´s professional advices, but also with the aim to set a positive example for his now nationwide conducted program to implement the preventive effect of sport and nutrition against the development of cancer in the broad public.

Professionally and privately he learned to know international habits all over the world, an experience that primed his open minded cultural (and political) attitudes – that may be recognized with a glance at the pieces of contemporal art in his office rooms. There he takes plenty of time to „not only give the necessary medical advice, but also to respect and communicate his feeling for the anger of his patients and their relatives, that are always welcome to take part in the visit“. In the office, besides family fotos and many national/international awards, colourful pictures are decorating the usually medical white walls.

Obviously Karl H. Link enjoys his life and his profession and, with this passion likes to face even the toughest medical problems to help his patients with most difficult diseases. This every day challenge in mind he has put efforts in prevention campaigns and coinitiated actions to e.g. propagate colonoscopy against bowel cancer, that are part of the meanwhile nationwide campaign „du bist kostbar“ („you are valuable“) of the German Cancer Society. „Colonyscopy might reduce bowel cancer by 70% in incidence. A surgeon must support this preventive measure against the cancer as a social task“, especially if he is an opinion leader continously listed in „Focus“ as outstanding specialist in digestive tract cancers.

In addition to this extraordinary engagement, he established, with support of a grant from the German „Krebshilfe“, in his hometown Wiesbaden, capital of Hessen, and three other Hessian cities three offices for psychosocial advice to tumor patients and their relatives, since he has the feeling for the fears of the tumor patients. Not only concerning their life, but also their family- and their professional social security during treatment of their disease and thereafter.

His decision to study medicine and to become surgeon,  a specialty  with broad offers on professional developments, has its roots in a personal experience: An appendicitis at the age of eleven. After the appendectomy, leading to immediate cure, he decided: In this way I want to help people!

His motivation to become „Surgeon and Head of the department“ was triggered by his desire to be free of inforcements and schematic actions. With this attitude, as cross thinker, he went beyond broadly accepted limits of the classical cancer treatment concepts with high class scientific steps. At a time, when cancer treatment  was conducted with single modalities such as surgery, radiotherapy or chemotherapy, depending on the type of the disease, or when patients with nonresectable liver metastastases were regarded as incurable, he started his research projects in those fields to improve the outcome of surgery. One of the projects  implemented treatment individualization in nonresectable liver tumors/metastases.

The first highly rated publication appeared in 1986, thirty years before this strategy is now the most up to date strategy in cancer treatment. He tested for individual sensitivity of the patients´ metastatic tumor cells in cell culture and molecular biologic parameters, tailored the chemotherapeutic protocol individually, and achieved ultrahigh response rates, translated into either resectability for cure or significant life time extension. His publications, e.g. reporting on survival of 35 months of responders to the individualized protocol vs. 15 months of nonresponders  have been respected worldwide. The major report was honoured as „Best Paper of the Year 2000“ in the highly rated international journal named „Cancer“.

His own conservative surgical collegues initially opposed these concepts. The same happened on his introduction of multimodal treatment in surgically resectable colon and rectal cancers in Germany, leading to significant improvements of surgical therapy. His work at the time of his innovations, now accepted standards, was not unanimously accepted and agressively criticized by his conservative surgical collegues in national scientific surgical and medical oncologic platforms. He and his work made their ways, and the strategies of multimodal therapy, downstaging, split liver resection, and treatment individualisation are now included in national guide lines or the main topics in national/international cancer meetings.

In the „Ulm Surgical School“ Karl H.Link was also involved in the improvement of the poor outcome of surgical therapy of pancreatic cancer. In spite of excellent surgery at top international level, survival exspectancy after „curative resection“ was only around 10 months. Helping to introduce adjuvant chemotherapy, survival was improved to 21 months in a European trial, published in the internationally top medical journal  „Lancet“.

With his sportive attitude to face challenges, Karl H. Link also was among the first in Germany to treat peritoneal cancer, at the beginning regarded as incurable: With the professional advice of his Japanese and US-American friends he applied their innovative treatment methods „Cytoreductive Surgery with Hyperthermic Intraoperative Peritoneal Chemotherapy (CRS/HIPEC), starting with the Ulm University team. After he had faced the „usual“ initial severe opposition of the surgical and medical oncological collegues, he has helped, being a member of guide line commissions of the German Surgical and Cancer Societies and other responsible positions, to introduce CRS/HIPEC as recommended therapy for peritoneal dissemination in colon and rectal cancer in the S3 guide lines.